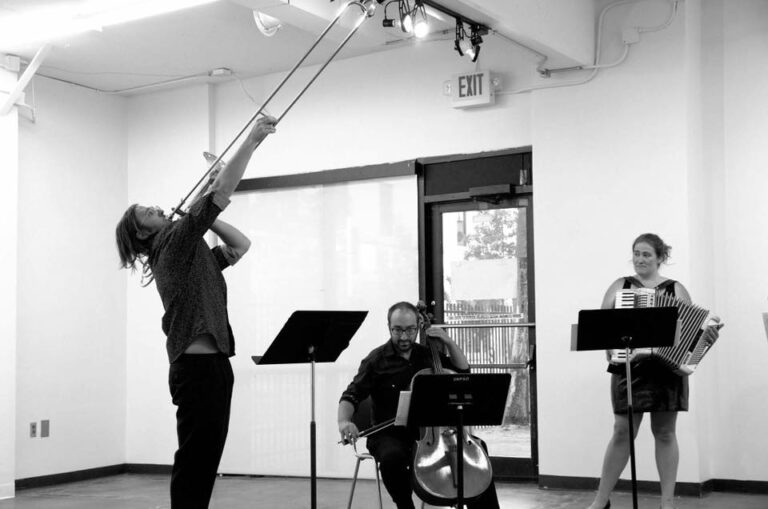 Out loud is an ongoing project of music composed especially to be listened with the eyes. The music score should be read in silent mode, doing only gestures without producing sound and respecting rhythm, fingering, dynamics and phrasing.
Funny and tortuous, the movements of the players brings the skeleton of the music back. This is not music to be performed by actors or dancers. The normal activity of the musicians playing their instruments and reading music, design the silent choreography. If the sound is gone in a concert, the attention goes to the peripheral aspects of the concert, emphasizing the music rituals. Every version of Out loud brings new questions about the practice of classical music.

Out loud #1  (2013) for violin, cello, piano , percussion and one assistent with a ping pong ball – commissioned by Aleph Ensemble, France

The first version of this piece was written for the Aleph Ensemble, France, in 2013. The instruments are: violin, violoncello, piano and percussion.
Its duration is only one minute. I didn´t get a video of the premiere in Paris, but I ‘ve got instead an audio recording of the concert. I find this paradox very interesting. As I said before Out loud is a piece basically to be seen, but the recording of this silent piece has certainly something on it: it brings a collection of new sounds. They are certainly not written in the score but triggered by it.
In a post 4.33 experience, the audio brings a new layer on this sociological experiment: we need to reconstructe the piece from its residual sounds, from its aura.
Listen to Out loud at full volumen!

Out loud #2 (2017) for trombone, cello, violin, accordion and percussion – commissioned by New Mexico Ensemble, US

Out loud is a music piece in the shape of a strainer where most of the sounds have gone away. The main composing was intentionally erased and only the leftovers survive: the unwanted sounds.
I say voiceless: I don’t want to write one more piece.
The music vanishes and we are facing its remains: breaths, movements, mistaken notes, eye-contact. As if it were junk spread on the beach, this “new piece” invites to draw the shape of a missing party from the waste. And the no-piece becomes a piece! Hard to escape the void. The music is defined for what it is omitted instead of for what it shows, in a post-Cage experiment reloading the forgotten sounds.
I wrote a silent piece with a lot of notes.
The musicians and the audience are still there, occupying the hall, facing a nothingness a bit silly. Both audience and musicians are repeating its concert rituals with the hope of recovering some sense.
Tired of being told…

Tired of solfège…
Tired of abstraction
Talk to me in my face!
The musicians are asked to play the shell of the egg, better said the air around the egg. The trombone brings the notes back from the outside in. One real sound. Hopefully the audience laughs, filling the air around like a breath of spring.

NMCE in Concert in Cryin’ Out Loud exhibition juried by Micol Hebron that examines the role of women’s and femmes’ voices as expressed in art about politics, activism, and emotion. Cryin’ Out Loud explores and celebrates the use of art as a form of speaking up and out. 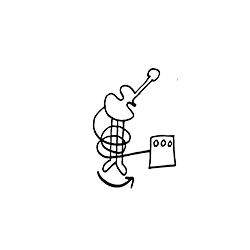 The disposition of the ensemble creates a very specific choreographic connection between the players. There are very clear lines of movement, produce by the ordinary playing of the instruments. Some of them are the direction of bowing (up or down) in the strings, the fingerings up and down the fingerboards or keys in the case of the clarinet. Out loud organizes these actions by using traditional musical notation. Other parameters – like dynamics, speed, chromatic scales up and down and tremolos- create, also, very specific movements in the players.

Related posts in my blog:

“Out loud is back” (English)