re-designs the oboe in a personal way in relation to the musical tradition. The organology (acoustical studies on how musical instruments produce sound) comes together with the creative exploration of sound possibilities and ways of playing: research and experimentation. In Música invisible, the extended techniques focus on how these new sonorities transform the perception of music, becoming extended listening techniques.

#1. Música invisible for English horn without bocal or reed is based on texts by Lewis Carroll talking about time. The text is spoken through the tube of the English horn using the pipe (and the fingerings) which is filtering the sound. 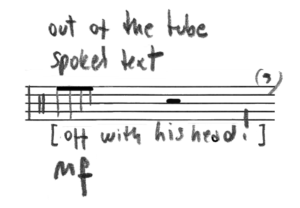 The texts by Carroll about time inspire the use of different speeds and polyrhythms in the voice and in the percussion effects made by the English horn. Música invisible for English horn is about clocks, beatings and the superposition of different tempi.

#2. Música invisible for oboe uses an extremely thin prepared reed, with a very long scrap. The reed is played with the lips away from the tip. This technique, created by oboe player Esther Kurtz, allows extremely flexible and very deep glissandi in a range of a minor sixth. It is possible to control the movement of lines in detail in detriment of exact pitch, that is more sliding, in analogy with a Hawaiian guitar.  Música invisible for oboe uses glissandi with different speeds, amplitude, duration and dynamics. All these parameters can be precisely controlled. The thin reed gives to the instrument an intense character, rather ritual, producing loud oscillating lines. Extremely soft glissing multiphonics bring contrast to the energetic music.

The prepared reed allows the oboe to gliss in the range of a minor 6th.

Música invisible is based on the exploration of new possibilities for English horn. The use of unusual techniques opens new ways of listening. When utilized from a completely different perspective, the musical instrument is not predictable anymore and becomes “invisible” from the musical tradition. Música invisible combines the composer’s creations with the performer’s experience, as two complementary sides of the composition process.
Música invisible is inspired by the world of Lewis Carroll. “Off with his head!” said the Queen of Hearts in Alice’s Adventures in Wonderland. This text literally beheads the English horn in Música invisible. Sounds are made over and through the instrument without using bocal or reed.

“…but I know I have to beat time when I learn music,” said Alice.

A selection of texts by L. Carroll about time, are used to create rhythmic clocks with various percussive effects on and in the English horn. A lullaby unites the piece like a leitmotiv, evoking a childhood atmosphere full of riddles, teasing, and madness.

Alice sighed wearily. “I think you might do something better with the time,” she said, “than waste it in asking riddles that have no answers.”
“If you knew Time as well as I do,” said the Hatter, “you wouldn’t talk about wasting it. It’s HIM.”
“I don’t know what you mean,” said Alice.
“Of course you don’t!” the Hatter said, tossing his head contemptuously. “I dare say you never ever spoke to Time!”
“Perhaps not,” Alice cautiously replied: “but I know I have to beat time when I learn music.”
“Ah! that accounts for it,” said the Hatter. “He won’t stand beating.”
…the Queen jumped up and bawled out “He’s murdering time! Off with his head!” 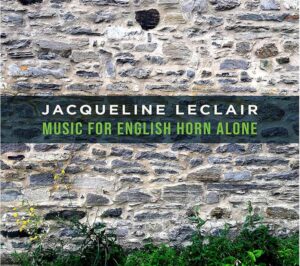