Música invisible for cello re-designs the cello in a personal way in relation to the musical tradition. The organology (acoustical studies on how musical instruments produce sound) comes together with the creative exploration of sound possibilities and ways of playing: research and experimentation. In Música invisible, the extended techniques focus on how these new sonorities transform the perception of music, becoming extended listening techniques.
This cycle of four pieces researches on natural harmonics until #16 in the full extension of the cello. It also explores extreme scordatura of the C string.  Thanks to the extreme scordatura, the harmonics are substantially lower and they have unique textures.

“In between cracks
the are sounds
able to be perceived with magnifying glasses.
Others can be only heard
with the lens of our own emotions.

I want you to lend me
your ears
to make my music.”

Música invisible for cello #1. Manifesto: a slow gliss in the third string brings from “the depth” of the string interesting pattern combinations of natural harmonics: crystal harmonic sounds together with the residual sound of the string.

Música invisible for cello #2 Double: is a counterpoint of two sustained melodic voices that uses harmonics and multiphonics.

Música invisible for cello #4. Extreme string: The 4th string scordatura, one octave lower, brings sounds in the threshold of hearing. The extreme scordatura affects also the natural harmonics in pitch and color. 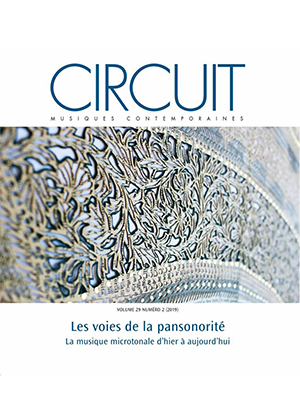