Out loud is music with the shape of a strainer where most of the sounds are missing. The pre-omposed piece is filtered so only the leftovers of the piece remain: the unwanted, the de-classed sounds. 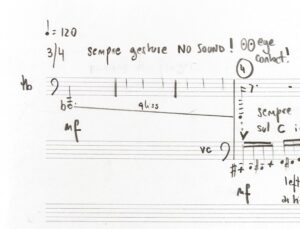 The ensemble plays tacet only gestures without sound.

The music vanishes and we can only hear/see what remains: breathing, movements, mistaken notes, eye contact.

And the no-piece becomes a piece! Hard to escape the void.

The music is defined for what it is hidden instead of for what it shows, in a post-Cage experiment the piece asks to remember the forgotten sounds in the own mind.

I wrote a silent piece with a lot of notes.
The musicians and the audience are present, occupying the hall, facing a full nothingness. The audience and the musicians, nevertheless, are holding to the concert rituals with the hope of recovering some sense.

Tired of following instructions…
Tired of solfège…
Tired of abstraction…
even not the intention, the resulting piece is quite humoristic.

The musicians are asked to build a piece around the piece. In this version, the trombone, at the very end, plays the only real note of the piece.
—

The first version of this piece was written for Aleph Ensemble, France, in 2013 for violin, violoncello, piano and percussion. It lasts only one minute! Even Out loud is a piece basically to be seen, I’ve got an audio recording of the concert that I find very interesting.  The recording of a silent piece is acknowledging all the sounds around the piece, so it is possible to hear everything except for what is written in the score.
Listening to the audio follows somehow the same logic of building sense for what is around instead of for what is shown. Listen to Out loud maximum volume!
https://soundcloud.com/ceciliaarditto/cecilia-arditto-out-loud

I am working now on a second version, a bit longer (3 minutes!) for the New Mexico Ensemble, for violin, violoncello, percussion plus accordion and trombone.